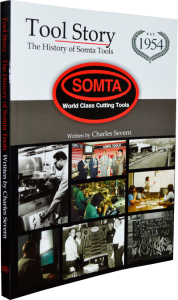 To commemorate its 60th anniversary, a book was written on the history of Somta Tools by Charles Severn, a former long serving Director and Shareholder.

The name SOMTA is an acronym for Samuel Osborn Mushet Tools Africa and these names have a rich history behind them.

Samuel Osborn was a large well known steel manufacturer and it established a factory in South Africa as an outlet for its special steel products.

From small and humble beginnings Somta grew into one of the largest cutting tool manufacturers in the southern hemisphere.

The book aptly named ‘Tool Story’, begins in Sheffield England in 1826 and progresses to the present day.

Engineers cutting tools are technical products and even though the book mentions the steels, equipment, the manufacturing processes etc, the book is interesting and easy-to-read.

It pays tribute to those who contributed to the growth and continued success of the company which includes not only its employees, but its customers and suppliers.