Bull elephant Ninio gets a helping hand from Somta 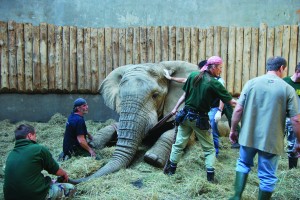 Zoo keepers at Poznan Zoo in Poland called in the experts when Ninio fractured one of his tusks.

The expert duo went to Poland to assess Ninio’s fractured tusk and treat an infection, which had developed in the affected tusk, despite the best efforts of the 13 year old elephant’s keepers. But after three hours of drilling, Dr Steenkamp had only managed to create a canal and remove the infected pulp and the team made the decision to postpone removing the tusk until a later date. 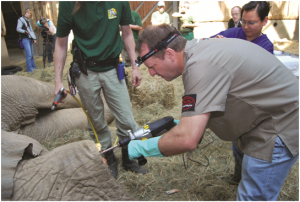 Dr Steenkamp contacted Somta after his visit to Poland. He told us that he had been working on an elephant with tusks that were 120 mm in diameter, larger than he had done in the past and with the tools that he had he could not extract the tusk. He wanted to know if we could support their efforts and, not having a large budget he was wanting to know if we could produce tools that he could use to extract a tusk. It did not take us long to agree to help.

With all of the new equipment and a multitude of plans Dr Adrian Tordiffe and Dr Gerhard Steenkamp returned to Poznan in early May 2013 determined to relieve Ninio of his problematic tusk.

“After two hours the tusk fragments I had cut were already starting to move. I was so optimistic! But by three hours into the procedure I was getting a bit dejected. We had said to one another that three hours was what we knew we could safely keep Ninio under anaesthetic for, even though he was under for about 4.5 hours the last time we worked on him, we knew that was far from ideal and things were progressing too slowly. At this point I opted for plan C.” said Dr Steenkamp.

“I have once before extracted a tooth with a winch and this was what I decided was needed in this case. The hand winch was brought in and it was attached to the most movable piece of tusk. After only about three minutes of applying traction to this piece of tusk it moved. Removing a tusk is like removing a pipe – what gives it strength is the intactness of this pipe. As soon as that first piece moved the structure of the tusk was weakened and I was able to manipulate what was left in the alveolus. The last piece I removed (with the winch) was enormous and once everything was out I wasn’t sure how I had got it out in the pieces I did! For long periods of time all I had done was focus on the immediate task at hand and silently prayed. There was lots of praying!”

“With the tusk removed all that remained was to empty the alveolus of the pulp. If left, this diseased pulp would continue to be infected and form abnormal ivory. This task took another 20 minutes of blood, sweat and tears.  At one stage (while my arm was literally up the alveolus to my armpit) I overheard Adrian say to one of the 23 people in the enclosure I could have gone into obstetrics!”

“After three hours and 45 minutes Ninio was standing. Adrian and I had discussed pain relief for Ninio in depth and it was very pleasing to see that after all that this elephant had gone through the combination used by my very able anaesthetist was working well. He started eating that same day. Within the next two days he was interacting with the other elephants, allowing close inspection of the alveolus and eating as if nothing happened.”