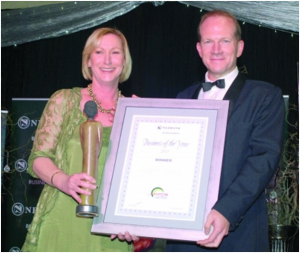 BUSINESS leaders and dynamic entrepreneurs from Pietermaritzburg gathered yesterday evening for the city’s premier business function, the Pietermaritzburg Chamber of Business (PCB)/Nedbank annual banquet, which honoured the remarkable achievements of business people in the city.

The Business of the Year 2011 went to Somta Tools and the award was received by managing director Allan Conolly. In presenting the award, the PCB recognised the company’s visionary leadership in an economically challenging environment and their implementation of significant productivity improvements and application of sound management principles.

Melanie Veness, PCB chief executive officer, said the Somta team proactively addressed the challenges that they were facing as a result of the world economic crisis, and implemented an effective turnaround strategy. “Not only has there been an impressive improvement in sales, but there has also been a remarkable turnaround from a significant loss situation to one of profitability.

“The company has managed to effectively balance real empowerment with managerial control, and the increase in sales due to greater demand and the introduction of new product ranges has resulted in the employment of an additional 45 people over the last year. “Somta enjoys between 55% and 60% of the high-speed steel market share in South Africa and exports to 72 countries worldwide. They are leaders in their industry and in business, and are most deserving of this award,” said Veness.

The runner-up for Business of the Year 2011 were Talbot & Talbot. The award was received by Dr Bernard Talbot. The Champion Entrepreneur for 2011 was Rick McCarthy, owner of Hair Sole’ in Victoria Road and Sole’ Hair Design at the Liberty Midlands Mall, as well as Training Leadership Consulting (TLC) — a professional services business focused on business improvement.

The Witness: “Visionary: Somta is named business of the year at awards ceremony”